STRATFORD TO STRATFORD 123 MILES ON A TANDEM IN ONE DAY

At 5.45am we finally managed to extract Lloyd and the tandem from the Travelodge lift in Stratford London. Lloyd had shared his 7th floor bedroom with the tandem, mainly for security reasons but also to allow final tinkering with the bike’s setup. 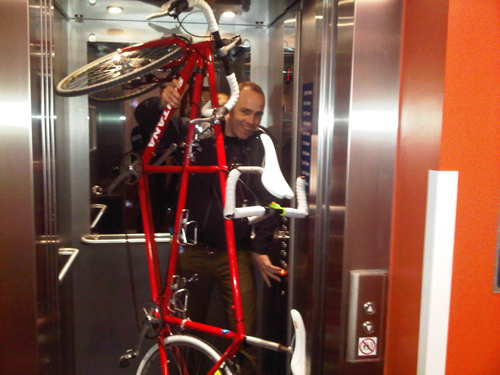 Lloyd in the lift!

We emerged from the hotel at 6.18am in the dawn light and a heavy drizzle. London never sleeps, so any hope of quiet roads was soon dashed. A quick glance at the Olympic stadium and we were off. 100 meters down the road I complained of a wet bum from the spray off the rear wheel while Lloyd had a drenched face from the front wheel. At least this is one small advantage of a tandem, you don’t get both!

As we moved into our cruising pace, passing several early morning commuters, we quickly arrived at the Thames embankment. Lloyd was on a mission; slightly jumping a red light an on coming Police car nearly put an early end to us. Clearly this is a common occurrence in London as the Police hardly flinched and just drove on.

Within no time at all we were passing Heathrow and then emerging from the frantic life of the Capital into the quiet streets of the suburbs. Like clock work we hit two hours and Lloyd hauled on the brakes, bought the tandem to a rapid halt, and devoured a fully loaded bagel. Riding with Lloyd you soon appreciate the importance he attaches to maintaining his calorific intake. Three wheetabix had helped him get out of bed that morning and from then on his gastronomic day was meticulously planned out, like a hibernating creature grabbing its final winter store. 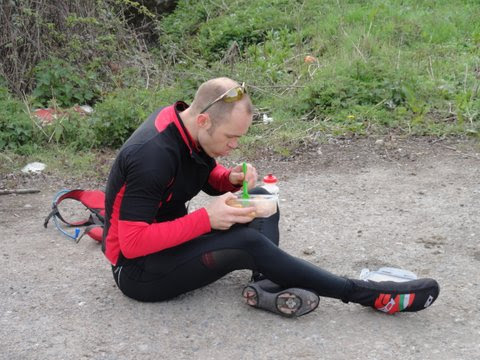 A navigational glitch by me meant that the tandem skipped the first check point at Dorney Lake. Hurriedly the support car, piloted by Shirley, was scrambled to the new checkpoint in Marlow.

Shirley’s choice of venue for the checkpoint was perfect, the car park of the Complete Angler Hotel, one of the poshest hotels of the south. I was the last person to gingerly enter the hotel reception asking for the gents as my cleats skidded around struggling to get grip on the polished marbled floor. The immaculately dressed porter, with a knowing smile, pointed me in the right direction. 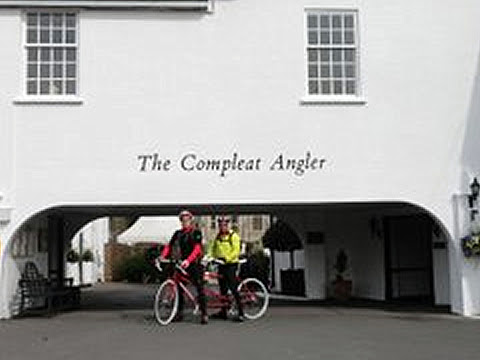 Back on the road, refuelled and with the temperature starting to rise a little Lloyd pushed the pace. Now it has to be said that Lloyd has a great technique of quietly questioning the performance of his co-cyclist, which he affectionately refers to as “the stoker”. He just occasionally will ask “does it feel to you like the brakes are on?” The message is clear, “your slacking mate, pedal harder”!

Moving into the hills north of Marlow saw some great climbs through beautiful tranquil wooded lanes, with not a sole in sight and only the occasional passing car. The contrast with the smoggy, adrenaline fired madness of London could hardly be more acute. Progress seemed steadier but still we were spending large amounts of time examining maps and stopping to read the GPS. We knew our average speed on the day would be disappointing but this was no ordinary ride. 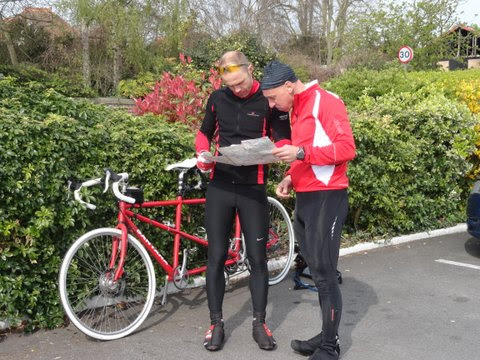 In a quiet lay-by on the outskirts of Cuxham Shirley was parked up for checkpoint 3 and Lloyd’s opportunity to tackle a massive bucket of pasta. Back on the bikes Oxford appeared sooner than either of us had expected. It was a most welcome sight. We had decided to ride straight through the centre of the City rather than take on a high speed dice with traffic around the ring road. Oxford was buzzing; with tourists who enthusiastically photographed us, couples who spotted us and commented “that’s what we need” and a rather stroppy Policewoman who shouted “cyclists dismount now” just as Lloyd had decided to take on a packed pedestrianised street! Again such an amazing contrast with the streets of the capital and tranquillity of the lanes above Marlow. Oxford felt alive and vibrant with thousands of buzzing students and tourists enjoying the lunchtime sunshine.

On the outskirts of the city we met up with our loyal support team once more for a well deserved stop. I was starting to see Lloyds eating as a bit of a challenge, so I tried to match him mouthful for mouthful. Completely out classed I decided to head for the grass verge, a chance to stretch out and even grab a brief power-nap. 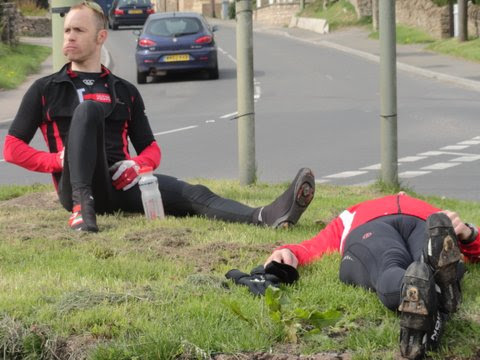 Now we were entering the Cotswold and we knew the climbs would start to tell on tired legs. We aggressively ascended the hill out of Chipping Norton only to receive a call from Eaton to say that we had passed the two-day team as they were enjoying a tea break back in Chipping Norton. Keen to meet up with them we descended the hill and rode back into the village for a cup of tea.

Back on our trusty tandem and enthused by meeting up with the other Speares team, we found fresh pace for the final leg back to Stratford as the sun started to disappear behind threatening clouds. Assisted with some great downhill sections we pushed the tandem to a new record top speed of 42.7mph!

Completing our mission arriving back in our home town of Stratford upon Avon, a passing tourist obliged by taking a quick photograph of us on the steps of the RSC. Lloyd and I shook hands pleased with our ride and delighted with the way the tandem had performed. 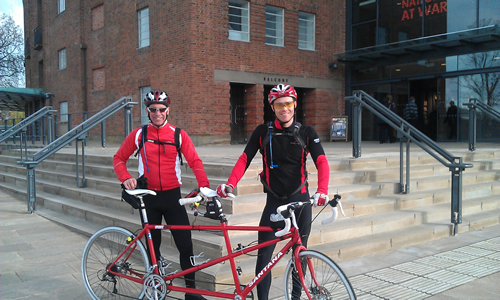 At the finish, in front of the RSC in Stratford-upon-Avon

I burnt 6,654 calories during the ride. Maybe, just maybe, Lloyd has a point about this eating thing!